Otters and Turtles and Herons


Wild spring winds have us continuing to seek sheltered paddling conditions on the quiet waters of the Noyo River. We continue to be amazed how protected it is from the wind that seems to be whipping everywhere else on the Mendocino Coast.

The wildlife seem to be enjoying sunny, warm, spring days on the Noyo as well. Last weekend's paddling started off with sitings of a river otter and then continued with mallard duckli 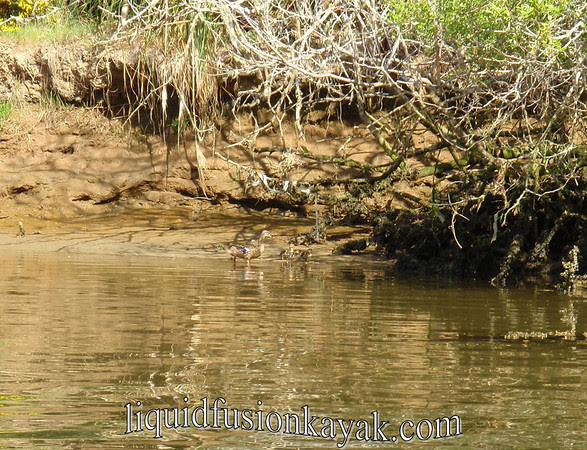 ngs, osprey diving for fish (sometimes catching one), assorted ducks (Harlequin, bufflehead, and goldeneye), herons, egrets, cormorants, and woodpeckers. The green herons tend to be shy and elusive of our eyes on the Noyo River, but we saw 3 of them at once and then continued to see them at different points during the day. I shot a photo of my favorite harlequin duck with a bufflehead swimming behind it and behold a green heron managed to sneak into my shot as well.

Sunday afternoon, Jeff and I enjoyed a peaceful paddle on a high tide up the river to the tunnel where the Skunk Train comes through the hill and makes its first crossing of the Noyo River. The water was so clear that I was constantly scanning the bottom - no abalone to scout for here but I am intrigued by river and creek bottoms and was hoping to see some fish. I commented to Jeff that one of these days we would start seeing turtles and sure enough - he spotted one on a log. Unfortunately the turtle spotted us and slipped into the water before I could get a photo. We then saw another one who appeared to be snoozing on a log just below the river's surface.

Being one who dislikes the wind, I have to consider this spring's windy season a blessing because it has made us spend more time on the Noyo River and has given us more insight into the river and its wildlife. I am working on a new video of sea kayaking and the wildlife of the Noyo River that I hope to share soon.
at 9:10 AM No comments:

Learning Experiences on the Mendocino Coast 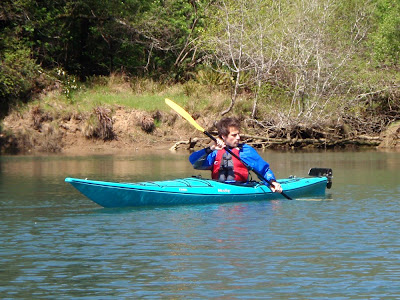 We are having a stretch of amazing weather on the Mendocino Coast and lots of exciting things going on. Jeff and I just completed our first sea kayaking instructional week on the Mendocino Coast. Actually, I did the organizing for this one and Jeff did the teaching as I was taking a lifeguarding class at the Fort Bragg Recreation Center (yes, I am now a certified Red Cross Lifeguard).

We are building our sea kayaking instructional program here on the Mendocino Coast and are encouraged by the progress and positive responses of our clients. We feel so lucky to have the flat, calm waters of the Noyo River to teach basic skills and then an exciting coastline to teach coastal skills, sea kayaks in the surf, and our favorite - rock gardening. 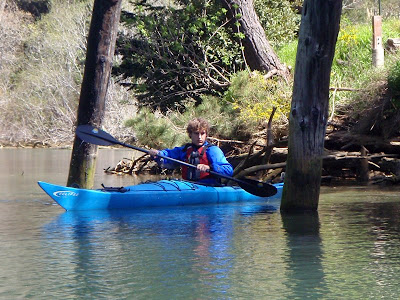 We are continuing to run our flatwater sea kayaking classes and tours from Dolphin Isle. It is protected from the wind and there is so much wildlife activity that we sometimes have to pause during our instruction to view the birds or river otters and their antics. On Tuesday, we saw both an Osprey and a KingFisher dive for fish in the river just in front of us. 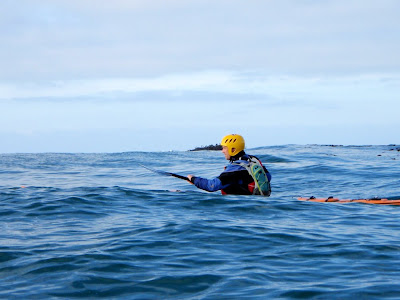 Our location for coastal instruction varies, but the Noyo Bay and the Fort Bragg stretch of the Mendocino Coastline continues to be our favorite. The bay is easily accessible, rich with wildlife, and offers a progression of paddling challenges which are great for teaching and learning.

Speaking of training, Jeff just completed a wilderness first aide class so we both have the most current and up to date first aide and cpr training and certifications. Between our classes and tours and other business happenings, we are training to further develop our own kayaking and guiding skills. The coastal fog yesterday morning gave us practice navigating in the fog. Today a swell increase will send us to the surf zone. Wahoo!!! Sunshine and surf are two of my favorite things!
at 8:25 AM No comments: 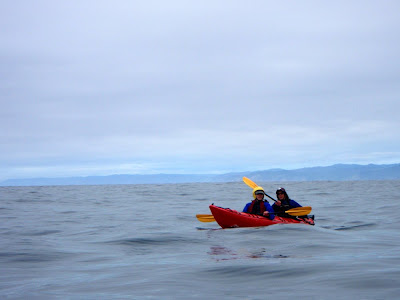 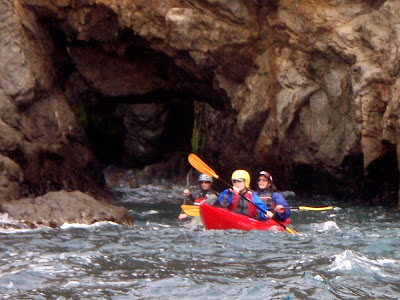 Ah . . . the maiden voyage of Big Red. Today we launched Big Red from the Noyo Beach. She is a Wilderness Systems Northstar - tandem sea kayak. This is the 6th of our brand new, specially made for us kayaks and she is a shiny beauty. So how did she do? GREAT!!! 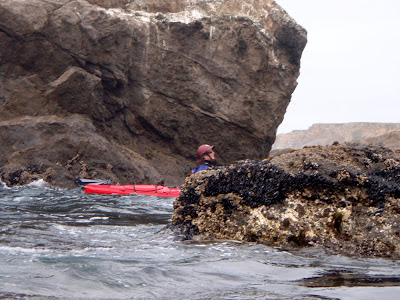 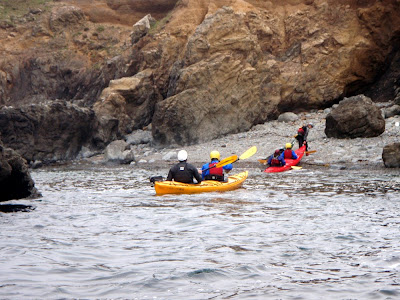 mals, and pelagic birds; however, it is not always the most kayaker friendly area. We paddle the Mendocino Coast all the time and use our local knowledge and paddling expertise to guide others. We have found the Wilderness Systems Northstar to be one of the most stable yet maneuverable tandem sea kayaks available for kayaking the Mendocino Coast. It is user friendly for beginners and performs well for experienced paddlers and the outfitting is very comfortable.

Here are a few photos of Big Red's maiden voyage. The top one is her at sea with the lost coast in the back ground. The next is Big Red exiting the Sinkhole sea cave followed by Big Red in the maze. Finally Big Red lands on Naked Beach followed by her older sister the Mango Tango.
at 8:36 PM No comments: 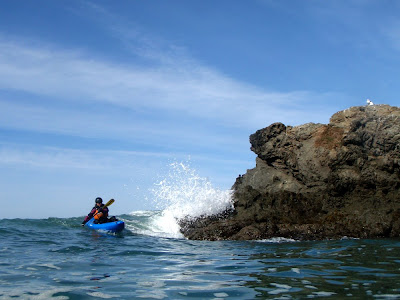 Last weekend we received 6 beautiful brand new boats. They were made specifically for us and I got to paddle one of them for the first time. Wow, I don't think that I ever paddled a brand-new, never paddled before boat. It was a surreal feeling. 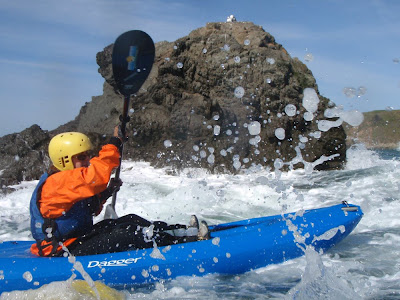 old on to your paddles and put away your skirts, it was a new Dagger Torrent. A what? Yes, I was paddling a sit on top whitewater kayak. We bought 5 of them for 2009 because we have been having so much fun with rock gardening in our whitewater kayaks that we wanted to share the fun with those who don't want to paddle a decked boat.

Typically I paddle a Necky Jive when we are rock gardening in whitewater kayaks - aka "short boats." The Jive is fast and carves nicely. My first impression of the Torrent was how nice it was to just jump on and paddle and not have to deal with the skirt. I liked that I could kick my legs out of the thigh straps when paddling straight stretches. I was very impressed with the tracking of the boat. We were paddling in 10 foot swells that would have had me bobbing and spinning about in the Jive, but the Torrent tracked straight as I paddled it with little correction. The Torrent was super maneuverable though and I could face the swell and spin a 180 to get onto the wave with ease.

I am not one to push the limits in a new boat and the conditions were not ideal so I will have to paddle it again to see how well it handles in our favorite pourovers and surge channels. I did a couple of eskimo rolls with it just to see what would happen and found it fun to roll. I think that our new Torrents are going to be the user friendly boat that we were looking for to share our rock gardening playground with others. Stay tuned for more reports and photos.

And of course I mentioned 6 new boats (only 5 were Torrents). A new sea kayak is still awaiting its maiden voyage.
at 10:09 PM No comments: 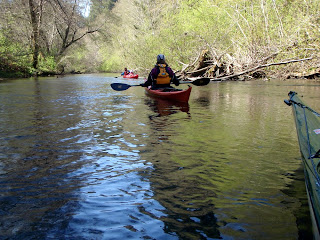 The wind has been howling on the Mendocino Coast but we've found a peaceful paddling refuge on the Noyo River. At times we bemoan the wind for interfering with our plans of whale watching, surfing, and coastal paddling; but we also appreciate it in the bigger scheme of things. The winds are essential this time of the year for upwelling nutrients in the ocean and are great for drying out our favorite mountain biking trails. They also have given us reason to kayak on the Noyo River more.

The Noyo River is beautiful in spring. It's beauty extends beyond greenery and blooms to the sounds of song birds and the ethereal feeling of spring. A perfectly timed paddle with the tide and the efficiency of our sea kayaks make the experience effortless and dream-like. 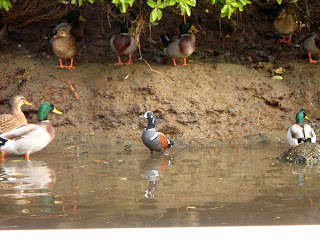 Of course we enjoy being entertained by the wildlife. Curious harbor seals follow us about and we are still regularly seeing "Cate's Odd Duck" (a lone harlequin duck). The osprey have returned and have discovered that a large white goose has taken up residence in one of their prominent nests. We are curious to see how long this situation remains.

While I have not been successful in my goal this spring of videoing whales from my kayak, I happened to catch a river otter scampering on the bank with my camera. As the winds continue, I hope to capture some more footage of our wildlife on the Noyo River. Wow, I can't help but think how lucky I am to have all of this in my backyard and to be able to share it with others.
at 9:04 AM No comments: