We were back on the Noyo River this year for the annual Audubon Christmas Bird Count.  The Mendocino Coast Audubon counts on us to count the Noyo River's colony of Black-crowned Night- Herons for the Fort Bragg Count. 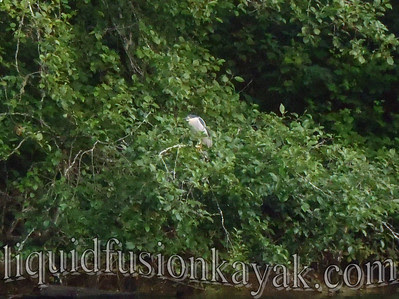 The weather forecast was dismal - rain and the Noyo River was flowing at a quick 1800cfs.  It turned out to be a beautiful day with lots of sun and a few rain and hail showers.  Jeff and I got a good work-out as we paddled up river into the current.  We ferried and used eddies as much as possible but still took some paddle power to attain up the river.  We made it about a mile up river from Dolphin Isle before turning around and going with the flow downstream. 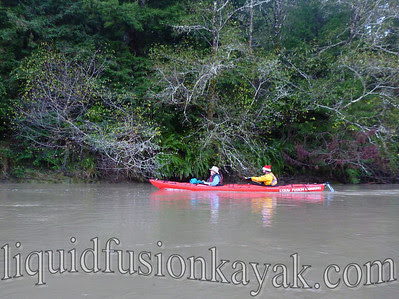 Geoff from Ukiah joined us again as a birder and tally person.  It is great to have a dedicated tally person as we sometimes can't put our paddles down to identify birds with our binoculars and tally who we are seeing. 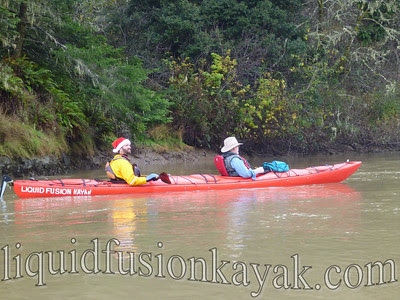 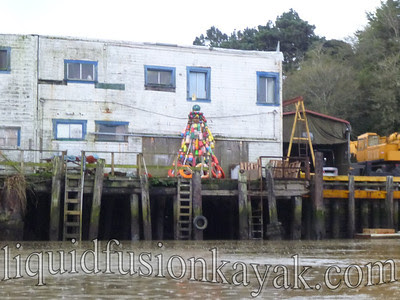 We dropped Geoff off at the harbor to connect with others about the possibility of a pelagic trip, but before we returned to LFK headquarters at Dolphin Isle, we stopped by the boat basin to see if we could find any more species.  We didn't add any additional bird species to our list but stopped for a moment to admire the California Sea Lions basking on the docks. 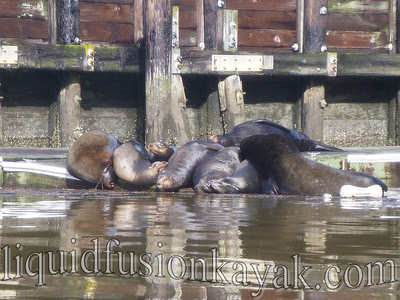 On our way back to Dolphin Isle, we did add an additional species to our list - one our our favorites, the Snowy Egret. 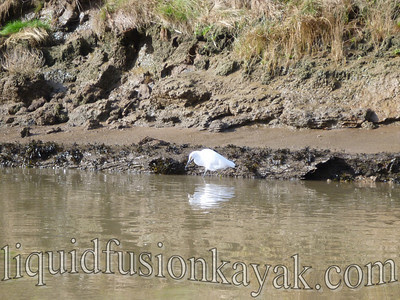 Overall, it was a great day birding by kayak.  We didn't see or hear as many birds as usual due to the stormy weather but we accomplished our main goal of counting the Night-Herons.  We also got 2 other species that no one else saw - a flock of Green-winged Teals and a female Wood Duck.  We don't commonly see Wood Ducks on the lower part of the Noyo so this was a surprise.  Hopefully she is enjoying the estuary and decides to take up residency. 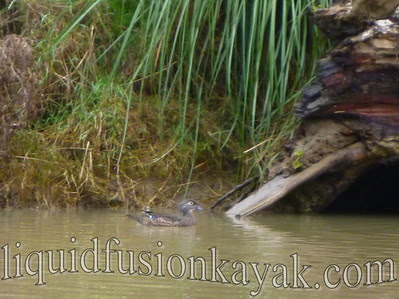 Once again we decked our hulls and joined the Lost Coast Chapter of the Traditional Small Craft Association in Noyo Harbor's Annual Lighted Boat Parade. 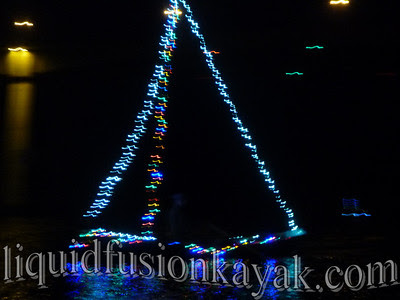 It rained most of the day but cleared off for a nice evening on the water. 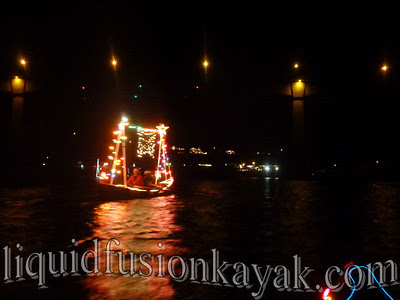 There were 5 boats total including 3 rowing skiffs, Diver Dan's Boston Whaler, and Jeff and I in one of our tandem sea kayaks. 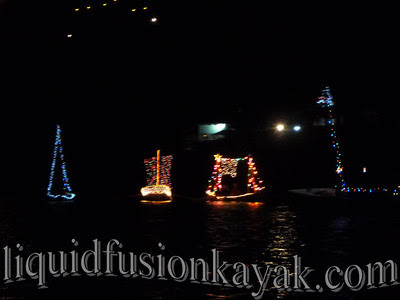 We hope that the folks dining at Silver's at the Wharf enjoyed our little parade. 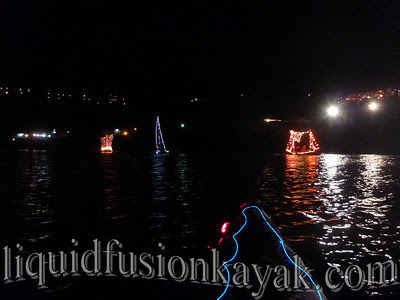 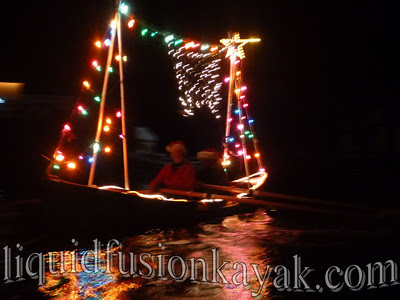 For years we have drove along Outlet Creek to go boating on the Eel and wondered what it was like to paddle it.  There are areas of it that can be seen from the highway and of course this view from the confluence of Outlet Creek and the Eel. 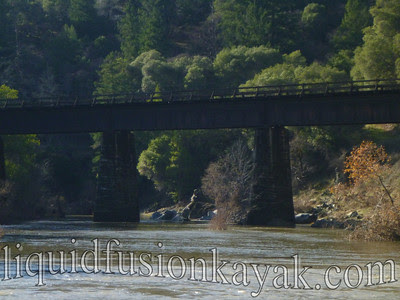 Last week the water was too high on most stretches of the Eel so Jerry, Jeff and I decided to give Outlet Creek a try.  We expected to encounter a couple of ledge drop rapids and lots of willow choked sections.

Early on in our paddle, we portaged twice through a large thicket of willows. 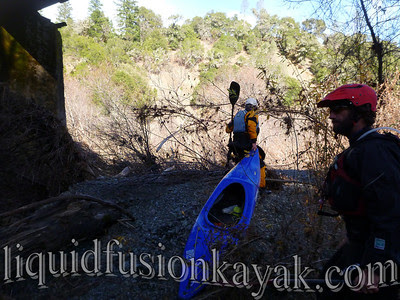 It really wasn't bad and was actually kind of fun.  Afterall, we were here for an adventure.  After the willow thicket, we managed to find channels through the willow bars. The ledge drops ended up being a couple of boney Class II and III rapids that were of course decorated with willows. 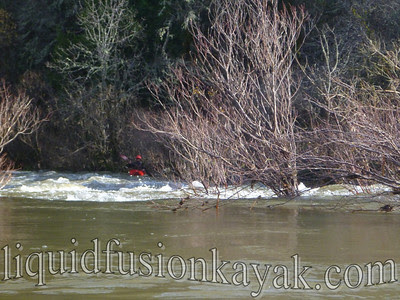 We were surprised by how beautiful the stretch was and thoroughly enjoyed the adventure including siting a Merlin and several pairs of wood ducks. 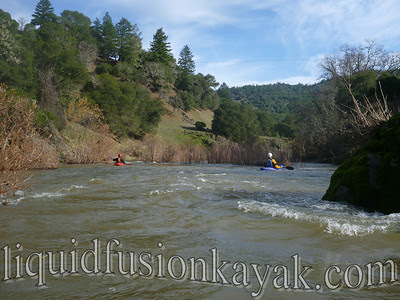 And of course lots of railroad trestles from the old Eel River Railroad. 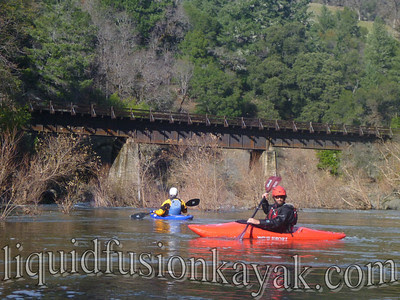 Would we run it again?  Perhaps if it was another warm, sunny day with lots of water on the creek and too much water elsewhere.

Rain, Rain, Rain!!!  We've been getting more than what we've asked for, but isn't that the saying - "When it rains, it pours."  Even though the road was closed due to flooding, we found our way into the Anderson Valley this week to boat on Rancheria Creek.  (Speaking of pours, the Anderson Valley of Mendocino County is know for its tasty beers and wines).

Rancheria Creek is one of those runs that when it flows, you gotta go.  For more information on Rancheria Creek, check out CACreeks.com or my article in the Winter 2010 Issue of California Kayaker Magazine.

On Monday, we had an inkling that a couple of friends were going to go and last minute looked at the Dreamflows and decided to do it.  We enjoyed the scenery and the boating and reuniting with some of our foul-weather friends (friends we only see during and after storms for boating purposes). 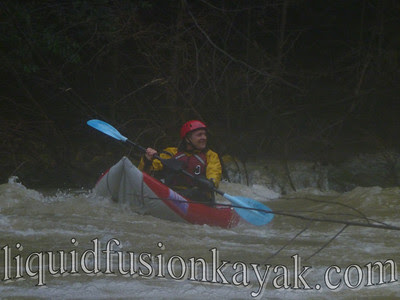 Of course we were filled with awe of the remnants of the high flows the previous night and many of the wonderous waterfalls that cascade into Rancheria Creek. 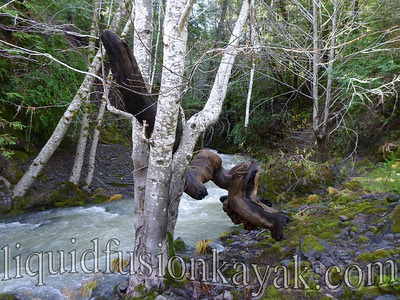 Several of us ran "The Ledge." 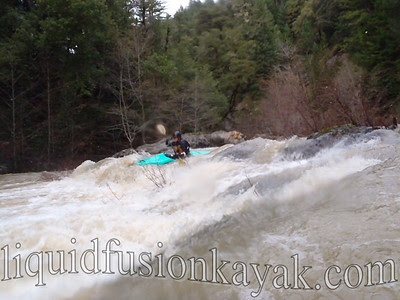 Bill of CACreeks runs "The Ledge." 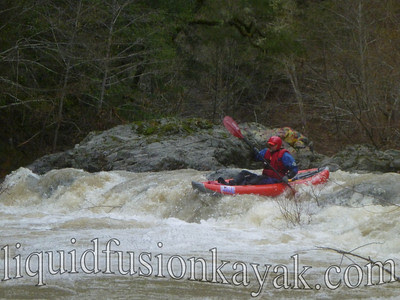 And of course Jeff surfed 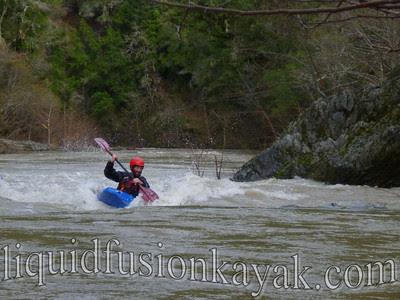 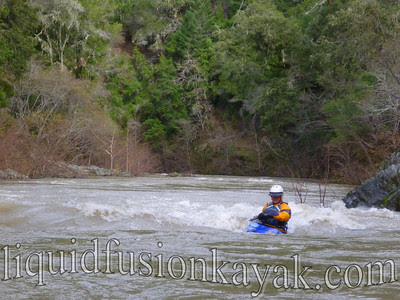 There was much conspiring for runs later in the week and excitement about the possibility of a wet, whitewater winter.  A special Liquid Fusion Kayaking Whitewater Event(s) is soon to be announced.

Here's a link to some of our photos and videos from our run on Rancheria Creek. 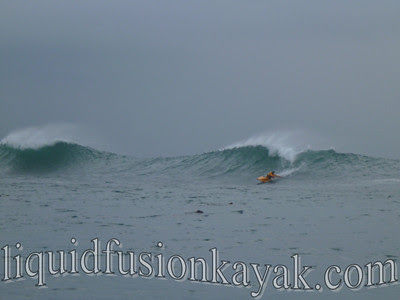 Whitewater kayaking on the Eel River 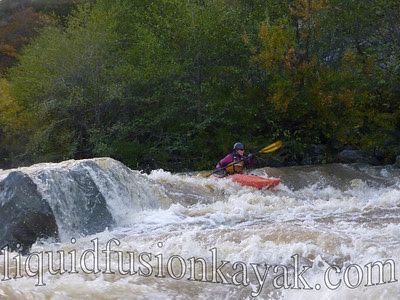 and in the sea (ocean rock gardens) 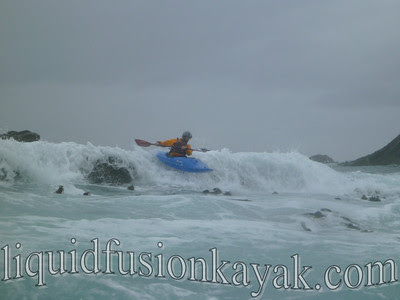 And creating Gift Certificates to share Mendocino Coast kayaking fun with others. 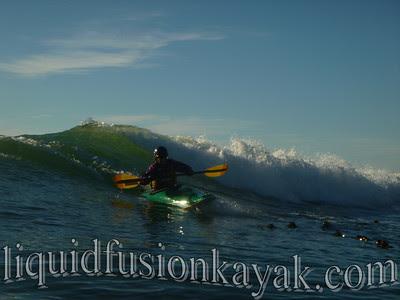 Of course we are also enjoying some quality time in the forest gathering wild mushrooms for dinner. 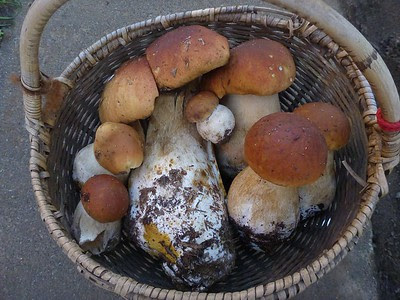 And signing autographs for our Sacramento friends - we were featured in November 25th's Sacramento Bee's Sunday Travel Section - Enjoying Mendocino Coast by Getting Outdoors.
at 8:11 AM 2 comments: