Time flies when you are having fun - or so the saying says.  We can't believe this was our 9th year hosting an on-water cleanup of the Noyo River and Harbor.  This year we had a stellar crew of 11 kayakers and 2 rowers.

Everyday we pick up bits of trash where ever we are . . . paddling on the river, paddling on the ocean, walking on the beach, hiking in the forest or running errands around town.  I think that many people do this.  Coastal Cleanup Day is a great opportunity for like minded folks to get together and share the care of our environment as well as get some of the bigger stuff that we can't get as individuals.
After last year's doozy of a project with the foam barge, we declared this year trash pick up only.  "No big projects," was my directive to the team.
Turns out our cleanup team was in for a project.  Two days before coastal cleanup day, a live-aboard boat that was moored in the river sank.  Bags and bags of garbage floated from it as well as gallons and gallons of fuel.  Starting in May, we called a variety of agencies with concerns about the trash and pollution from the live aboard boats moored in the river this summer.  We know other concerned citizens called as well.  Nothing was done.
Fortunately we had a solid team and picked up as much of the trash as we could get. 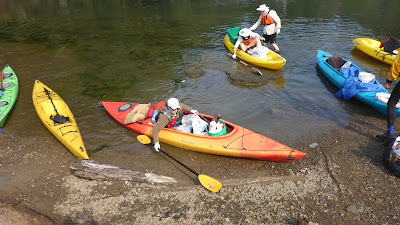 After cleaning up the river from the sunken boat, we turned our efforts to the Noyo Harbor Area.  A particularly trashy spot is the South Beach under the Noyo River Bridge.  It is a collecting spot for litter, marine debris, and transient encampments.

Again, our team pitched in to get the large and small trash from the beach.  A huge thanks to rowers Stan and Jim who have been with us for all 9 years of the cleanup. 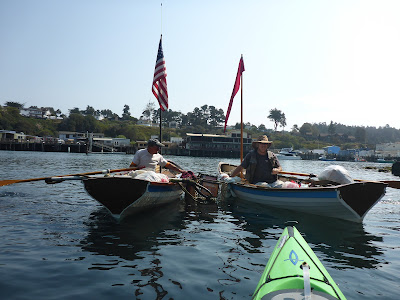 Trash happens.  Everyone has had a wrapper blow out the window of the car or off our picnic table.  Thanks to everyone who picks up where and when they can.  And a huge thanks to those who coordinate cleanup events and all the participants who come out.  Together we can make a difference.

On another note, I am extremely saddened by the state of affairs surrounding the sinking of the Raven's Ghost in the Noyo River and all the pollution that has resulted.  We can help with the trash and debris but not the fuel.  Our pleas to numerous agencies to help before the ship sank were heard but not acted upon.  When she sank, agencies came by and observed but still no action.  No containment measures were deployed and gallons of fuel and other toxic materials allowed to leak into the river.  I am sad that no one could or would help.
at 9:55 AM No comments: